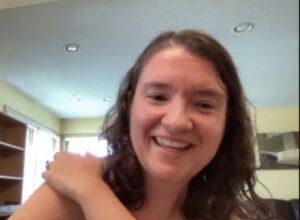 Heather Cherone, 43, joined the regular Mincing Rascals podcast crew in September 2019. She’s been the political reporter for WTTW-Ch. 11 since April 2020. Before that she was the managing editor and City Hall reporter for The Daily Line, a subscription newsletter on Chicago and Illinois politics. She’s also worked at four daily newspapers and internet startup DNAinfo. She’s a graduate of Kenwood Academy in Hyde Park and has undergraduate and graduate degrees from Northwestern University’s Medill School of Journalism. This interview was conducted and published in January, 2022.

ERIC ZORN: I want to start this interview before the point at which your résumé begins. Where were you born? Where did you grow up?

HEATHER CHERONE: I grew up in Chicago, right on the lake in the Edgewater neighborhood. I spent much of my childhood in Loyola Park (near the intersection of Touhy Avenue and Sheridan Road) And I’m old enough that I predate the Chicago Public Schools selective enrollment system. So after I graduated from Decatur Classical Elementary — a magnet school in the West Ridge neighborhood — I had to choose between Kenwood Academy, Whitney Young High School or Morgan Park High School. I chose Kenwood even though it was far south and we were far north because my mother was working as a nurse at the University of Chicago Hospital at the time so I could catch a ride with her in the morning and then come home via the CTA, which was actually a really great way to get to know the city.

EZ: Going to your neighborhood high school wasn’t a possibility?

HC: That would have been Senn High School, and back in those days it was considered a sort of a rough place and was never part of the discussion for us .

HC: One. I have a younger brother who is far more accomplished than I am. He’s a captain in the Marine Corps currently deployed in South Korea.

EZ: Given that Kenwood Academy and UChicago really are on the other side of the city, did your family ever think of moving?

HC: We never really thought about it. Also, I was lucky to live close enough to a teacher and a coach on Kenwood swim team so sometimes I could catch a ride with her to early-morning practices. When it wasn’t swim season I spent most afternoons after school working for New Expression, a not-for-profit paper for Chicago public high school students. That was my first exposure to covering the city as a whole as opposed to just covering Kenwood — because of course I was very involved in the student newspaper there, and by the time I was a senior in high school I had made all of my friends join the paper so I could have a staff.

EZ: What was it about journalism that excited you?

HC: I was one of those annoying 5 year olds who, when grown-ups would ask me, ”What do you want to be when you grow up?” instead of saying “a ballerina” or something, I’d say, “ I’m going to grow up and be a journalist.” And they were like okay sure. But I grew up reading the Sun-Times. I grew up reading the Tribune I grew up watching Bill Kurtis and Walter Jacobson every night along with Dan Rather. I was a naturally nosy kid and I thought it was a pretty good deal to get paid to ask people rude questions so I was, like, yes. that sounds like what I would like to do. And I knew that I liked to write. I was always one of those kids who was writing stories. Then when I was a sophomore in high school I had an English teacher and she recommended that I do a summer program at Northwestern for aspiring journalists.

So I ended up going to Northwestern and worked as hard as I could to get through school and get a job as soon as possible. My first professional journalism job was while I was still in college — I was the night police reporter for the Daily Herald in Arlington Heights. I ‘d finish class, eat dinner and then drive from Evanston to Arlington Heights and I would work until 1 a.m. or maybe even a little later reporting on crime and assorted misdeeds in the suburbs.

For school we had to go on reporting internships, so I decided to get as far away as possible. Most of my life had been spent on or around Sheridan Road — I grew up near there and my first dorm at Northwestern was on Sheridan . So I ended up in California, at the Orange County Register.

I went back to the Register that next summer and ended up getting a job at the Los Angeles Daily News right after college through connections with an editor at the Register. And that’s how I ended up in California from 2000 until 2007.

The Oakland Tribune was owned by the same conglomerate at the Daily News, so that gave me a foot in the door when the Oakland Tribune had an opening to cover Jerry Brown’s second term as mayor of Oakland. I got that job and it was a lot of fun. He was an interesting dude.

EZ: What else was going on in your life at that point?

HC: I was living with my future husband, who moved to Los Angeles to be with me after finishing two years in the Peace Corps.

EZ: Where did you meet?

EZ: Well, my parents dated when they were in high school in the late 1940s and they’re together more than 70 years later, so it certainly can be done! Did he go to Northwestern with you?

HC: No, he went to the University of Illinois. We didn’t start dating until late in our senior year at Kenwood, so by then he was already committed to U of I and I’d had my heart set on the Medill program at Northwestern for a long time. So we did the long-distance thing.

After he graduated from college he joined the Peace Corps and I moved to Los Angeles, then when he was done with the Peace Corps I was still living in Los Angeles so he came to visit me and never left. And now we have two kids and a house in Park Ridge and a bird feeder.

EZ: What does he do?

HC: He’s a sales consultant for Follett Corporation, the textbook company. Before that he was an elementary and middle school teacher for many years.

EZ: How old are your girls?

HC: They’re 12 and 9, so I’m in the thick of middle school drama. And if somebody had told me hey, if you have kids, you’ll have to go through middle school and high school again but this time it will be more painful because you’ll have to suffer the most precious human being in the whole world going through it, I might have had second thoughts.

EZ: I know being a parent is a lot of work and your job is very demanding, but do you have time for other things? Are you still swimming? Have any hobbies?

HC: I don’t swim anymore. I have very few hobbies. I work way more than I should.. I love to read and I do love murder mysteries. Once upon a time I did a lot of sewing and crafting projects but that’s really hard when you have little babies and toddlers climbing all over you. But every year my New Year’s resolution is to work less and relax more. It’s not looking good so far for 2022.

EZ: Picking up your story in Oakland. Where did you work first when you came back to Chicago?

HC: I went right to the Tribune where they were planning to cover the suburbs in a different way, and I was part of that effort . I covered Downers Grove and Hinsdale and all sorts of different suburbs for them . The Tribune signed on with a firm called Journatic that outsourced that coverage, and so I was let go. At the time I was also freelancing and working as an adjunct professor of journalism at DePaul University. So I thought, well, maybe I won’t do journalism anymore; maybe I’ll just teach journalism. But right around then, DNAinfo launched and I ended up there. It lasted longer than I expected, from 2012 until it imploded in 2017. Then I freelanced and ended up at the Daily Line for a couple of years. Then to WTTW.

EZ: How did that job come about?

HC: They came to me. I was lucky enough to become sort of a regular on “Chicago Tonight, The Week in Review,” and I guess they thought “Hey she’s not terrible on television.” And I fit into their plans to expand their political coverage. So I started with them just as the pandemic was taking over everyone’s lives It was a pretty crazy time to start a new job.

EZ: I think the first time I ever heard you was on “Connected to Chicago,” the WLS-AM 890 news roundup show/podcast that you still appear on nearly every week.

HC: Yes, one of the most “pinch-me” moments of my career was when the show’s host at that time, Bill Cameron, who’d been covering City Hall for like 50 years, came up to me and said, “Hey, you seem to know what you’re talking about, come on my show.” So now I get to talk with people like Lynn Sweet, Greg Hinz, Fran Spielman and Ray Long.

EZ: And we get to talk with you on “The Mincing Rascals.”  Thanks, Heather.

Published in Meet the Mincing Rascals

Eric Zorn is an emeritus columnist for the the Chicago Tribune.